Marcel Alocco was born on 8th of February 1937 in Nice, France where he lives and works. After his literature studies in Aix-en-Provence University, he goes back to practicing visual art by mediation writing and he actively participates in Ecole de Nice: firstly with Fluxus, then from 1966 to 1970 he was creating aesthetics with Supports-Surfaces. In the spirit of Fluxus, he creates his work (Bandes-Objets, Le Tiroir aux Vieilleries) using various materials, then in 1967/68 he works with bed sheets, on the transformation of forms confronted with the conditions of application while experimenting with ideograms, relation with text-forms in painting. For him, an image is a fundamental component of painting because whatever we do, “each painting makes an image”, he writes. From 1973, he elaborates his fragments of painting using patchwork: the fabric is painted, torned up, then sewed or knitted back together, referring to the same process of colors, figures and related materials – thus completely giving a visual art effect. Unweaving of painted canvas occurs in 1980 as a way of transforming an image by displacing fragments of support/color.

The most basic technique of patchwork, while introducing continuous-discontinuous dialectic, is attached to it as a tool to liberate creativity, as Michel Butor confirms: <…> “in your work we can only see a tear of fabric. Neither cutting nor ripping. Neither scissors nor snap. Your canvas with ragged and fringed edges shows liberty in a different manner than canvas of other artists and communicates with the outside. (Catalogue Alocco, Musée d’Art Moderne and d’Art Contemporain, Nice, 1993).

Exploration of origins (and archaic techniques) lead Marcel Alocco interested for (according to hypotheses of S. Freud) the invention of weaving women’s hair. From February 1995 to 1999, he examines painting using hair support-color , developing subtle miniatures from simple weaving. In December 1999, he decides arbitrarily to stop working as a visual artist, and commits himself to writing. In December 2003, he engages himself in visual arts again doing various weaving researches on ikat images, afterwards he confronts once more the problematic of origins in his early childhood works (“Mes enfances”), firstly on paper, then on canvas and finally weaving. 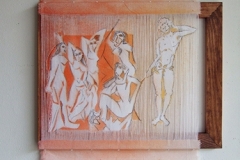 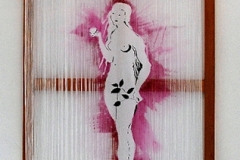 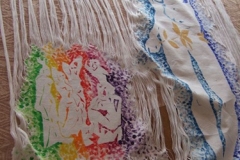 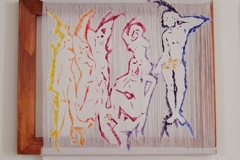 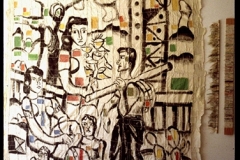 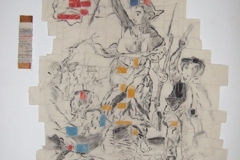 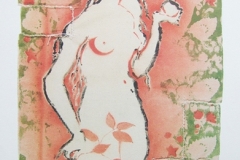 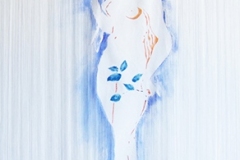