The work of Christine Maillot is a work in progress, the achievement of a long intellectual elaboration (many theoreticians are called for support during her long conceptual writings), but also plastic, because her work nourishes of materiality itself. Indeed, despite her work exposed globally using the most recent technologies (photography, printing, light, digitalization, etc.), these pieces of work always contain a plastic material base (paste powder, diverse concretion, etc..) then allegorically dissected.

Therefore, the luminous crates presented at this exposition, by their light constitution, their haunting repetitive images, by the mysterious effect of bluish light that cross them, filling them with a milky aura, tend to create a fluid , rhythmic and vibrating sensation united to the magic transmitted by the sonorous world because in undulating mechanic, luminous and sonorous frequencies are analogical.

For the artist, everything started in a previous period, when painting was still her privileged support. For example, a big painted double sided canvas testifies of her need of capturing two aspects of the multiplicity of the world and the psychic states attached to it : the allusion to our capacity of seeing only one thing at a time while others stay inextricably hidden. A little later, in the same effort to outline different aspects of reality, Christine Maillot paints her self-portrait on two canvas placed next to each other.

But these canvas split in two don’t satisfy completely the artist because they don’t dissect the voice enough, this voice « express itself at the junction of Psyché and of Soma », as she says in one of her texts. Soon after she will start looking for other ways to capture sensations in her images.

Impressed by the richness of the world of music and in particular by the emotional charge present in the extension of the voice, she wanted to physically incorporate in her work the incantatory vibrations of singing, her sonorous envelope. This desire lead her to a deep research of new plastic materials and of representations making her work more complex : spring sculptures photographed, layered and retouched on the computer etc., in order to materialize to the best extent « the flesh of the world » like Merleau Ponty said.

All in all depending on man.. We are then summoned to look at these images, constructed like immaterial partitions, like x-rays of a memorized and fantasied reality, mixed in emotions, a reality that escapes from us and leaves us defenseless in front of the grief of nostalgia, with a « music of Humanity ».. 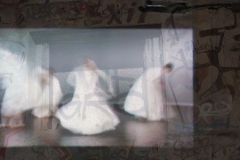 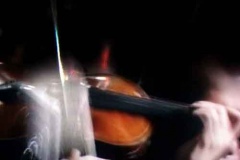 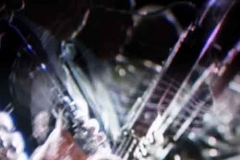 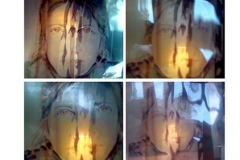 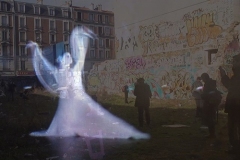 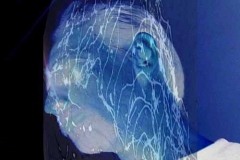 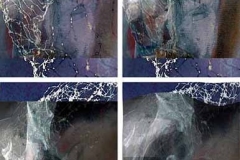 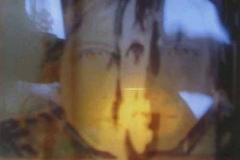