Apprentice ceramist, he studied at the Fine Arts of Amiens.

Soon he wants to leave the narrow confines of ceramics. Exasperated, he throws his creations, barely dry, against a wall. The result fascinates him … Something has been added to the first form. At 19, showing the result of his “anger”, an artist of the group Calibre33 Is it art? he announces that he is an artist and that what he produces is a work of art.

Afterthought, he begins to paint and expose his paintings. Ben notices his productions and places them under the sign of “Free Figuration”. Ben’s assistant for 3 years, he grasps that it is not his production, but his attitude to it, which is art. Many galleries recover its work, the Macé Gallery in Cannes, Daan Gallery in Amsterdam, the Contemporary Art Gallery of Nice and Villa Arson as well as the Museums of Toulon, Nantes and Bologna. The paintings of this period can be found at the Saint-Etienne Museum, the MAMAC in Nice, and at the Contemporary Art Gallery in Bologna.

In 1995, back in Paris, he discovered the polyhedron. With polyhedra, all forms are present, in power, virtually. Finally rid of the form or rather of any formal research, it remains only to represent the void or the infinite … Sculptures, very real, aluminum or pvc, will be exposed in galleries, like those of Bob Benamou or that of Michel Rein in Paris, will join private collections or FRAC. The virtual sculptures will be presented on computer and from 1998 on the internet.

The birth of the web will reveal him and bring him a continuous flow of images and texts, mixing news, history, art, debates … Short and medium-length films. These films are presented in experimental film festivals and videos.

In 2012, Frédéric Fenoll abandons all this advanced technology, to invest in a new adventure, with a pen, a brush, a sheet and a bottle of ink from China. A need for lightness, freedom? With a single line, he summons the bisons of the Lascaux cave, Jackson Pollock’s dripping line, Hergé’s clear line, Dürer and Hans Bellmer’s engraved line, Günter Brus’s bloody line. A line, a single continuous line, black of ink able to represent all the threads of the Universe … The work, the works of FF are to be seen and reviewed constantly taking into account this unique and multi-layered trajectory -dimensional! 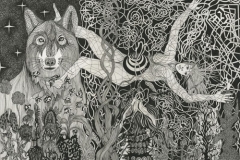 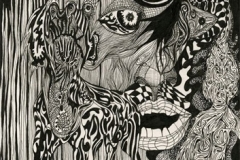 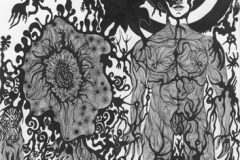 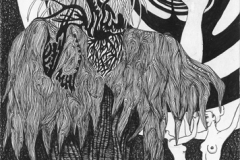 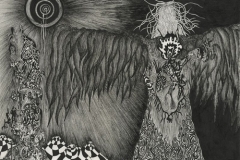 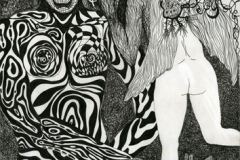 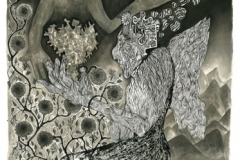 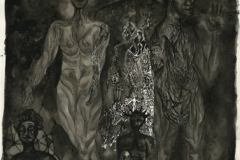